I traveled to the Palani mountain range over the weekend. I went birding in its moist deciduous forests. From Flycatchers and Flowerpeckers to Sunbirds and Bulbuls, they came to me, brimming with love. Raptors of different sizes graced the skies. A large blue butterfly dropped by to enchant me. Also, I saw an Indian Rock Python scampering across the road at dusk.

But I was preoccupied all the while. Given the company, I was unexpectedly distracted.

I blame it all on Jean-Paul Sartre. I was reading Intimacy during the overnight bus ride. I stumbled upon something so beautiful that I had to put the book down. It sent shivers down my spine; the way a winter morning blows cool air into a bird’s nest and bristles its twigs. But then, it poured gasoline all over me and burnt to crisp any half-baked clarity I had about the universe.

It had been a few years since I buried my nose in a book. I used to read a lot. I had to stop because I started to mimic my favorite authors. Instead of being inspired by them, I tried to make observations like how they did. I wanted to be a storyteller like Franz Kafka. I ached to make Albert Camus proud. I craved for lessons from Virginia Woolf. A stroll in the woods with Ernest Hemingway and Mark Twain is pretty much all I wanted out of life.

I was the fat man in the Hangover trilogy, trying to win the respect of dead writers to elevate my own ego. And so, I had to let go off books for a while. 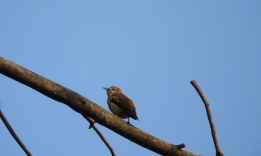 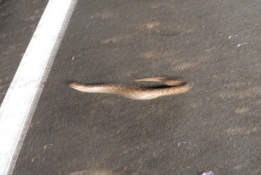 Last Friday night, I pulled out a hardcopy of Sartre’s Intimacy that had been collecting dust in my backpack for months. Turning turtle in a cramped upper berth, I held the book a few inches away from my face. The pages could hear me breathe. Unfortunately, matters came to a screeching halt when I came across the below passage on Page 3,

“You ought to love all of somebody, the esophagus, the liver, the intestines. Maybe we don’t love them because we aren’t used to them. If we saw them the way we saw our hands and arms maybe we’d love them; the starfish must love each other better than we do. They stretch out on the beach when there’s sunlight and they poke out their stomachs to get the air and everybody can see them; I wonder where we could stick ours out, through the navel”.

It mugged my mind, thieving my lungs of their respiratory functions. I drank so much water that I had to ask the driver to stop the bus for an unscheduled bathroom break. 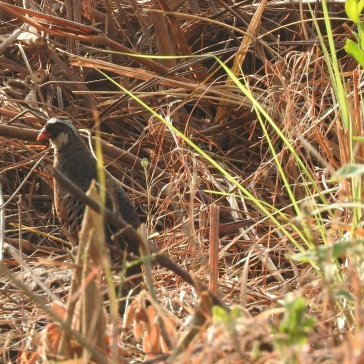 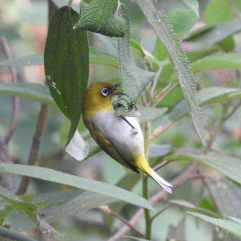 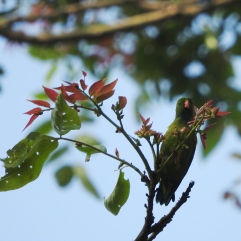 It wasn’t just because Sartre had written it beautifully. It had more to do with how great writers can draw blood without even throwing a punch. His descriptions of love, sexuality, and longing of the human soul were so layered that I had to reread every paragraph.  Each time, it led me through a different wormhole.

I couldn’t get his words out of my mind. They haunted me even while I was birding at dawn. When I spotted the Nilgiri Blue Robin, I wondered if his lover ever tasted the orange on his feathery chest. I saw a Painted Bush Quail during a hot afternoon. All I could think was about her talons piercing through soft skin. A pair of Yellow-Browed Bulbuls were playing hide-and-seek with Oriental White-Eyes. A Flame-Throated Bulbul was plucking fruits without any inhibitions.

And it seemed as though all their spirits were throbbing together as one. Like a giant origami bird intimately rubbing its tail-feathers against my cheeks. I could have sneezed in watercolors, and nobody would have noticed. 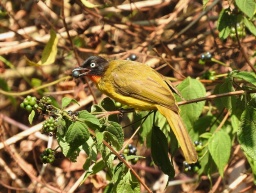 When I came back home, I wanted to write about the birds I had spotted. I sat down to read the notes I had scribbled on paper and stare at some photographs I had taken. As I started writing, I realized that some of my elucidations were familiar. There was a running theme. And once again, I was trying to sound like someone else.

These experiences weren’t entirely mine. They belonged to Jean-Paul Sartre too.

As for the birds of the Upper Palani Hills, for a couple of hours at least – they belonged to me. Nobody else could claim them as their own. They were mine to admire from a distance, photograph as penance and take lessons from.

And now, for a few minutes, they belong to you too.

32 thoughts on “To read or not to bleed: Palani mountain blues”