Great Indian Hornbills look visibly upset when they sense danger in their surroundings. They let out a guttural cry as they take flight like wondrous paper planes, to find a vantage point. They aren’t scared easily, though. They are one of the largest hornbills in the world. Any predator would think twice about pissing them off. Malabar Trogons panic, like most smaller birds, when their nests are under attack. With one swift movement, they position themselves at a safe distance. Then, they stare at the intruder, dead in the eye, and purr softly – like a spellbound cat.

Earlier this year, I had the dubious distinction of interrupting the feeding sessions of these gorgeous birds. Yet I was spared the guilt of being a nuisance, and the Hitchcockian tragedy of being pecked to death by birds.

I put the camera down and backed away, leaving them in peace. 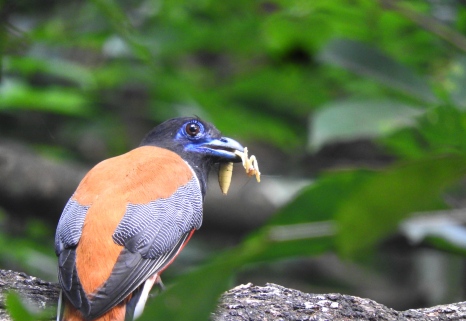 I saw an adult male Trogon leave a tree stump, near the Attakatti forest check post. He resembled a red lava lamp shot out of an invisible cannon. I found him perched, still as a painting, on a hanging vine. In-between his beak was a praying mantis, either dying or practicing a dangerous form of Tai Chi. Soon, a female Malabar Trogon landed on the same vine. She looked at me like a mother would a petulant child.

It was my second sighting. I first spotted them in Thattekad, with the help of a professional birder whose time I had paid for. This time, it felt a lot more special.

He took flight after three full minutes, heading back to the stump. I inched towards it for a closer look. My heart jumped out of my chest and body-slammed itself on my third eye. He was feeding the mantis to the fledglings. Excitedly, I clicked a few photographs. He seemed to be vastly disturbed by it, as he flew off again. 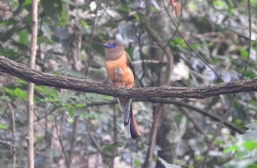 Later that morning, I went to see a Great Indian Hornbill couple at a familiar spot. I have known them for three years. And I was already informed that the lovely pair were feeding their chicks. A few photographers were shooting the male by the time I arrived. The hornbill was hopping around on a fig tree and collecting fruits. The female was nowhere to be seen. I sauntered around, waiting for one of them to return to the nesting tree. 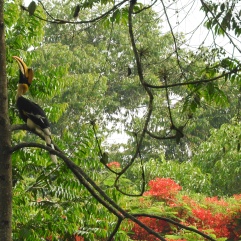 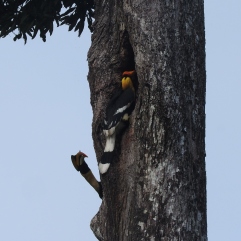 In a few minutes, I heard the loud flapping of wings. I craned my neck to see the Great Indian Hornbills in flight. They landed in spectacular fashion, as my stupid Nikon digital camera was pointed towards them. The wind sang in the key of A-minor. I might have been sexually aroused too. Not that I was lusting after the birds or any of the members of my species. It was a bodily reaction to something that my mind was unable to cope with. The sheer beauty of it all.

At once, they began placing the figs, one at a time, in the tulip-shaped mouths of the baby hornbills. I stood there and photographed the feeding sessions. A forest officer then came over, riding a tiny moped, and told us to back off. I tried to argue that there was no disturbance. My ego grew in size as I passionately told him that I knew what constituted to ethical birding and what didn’t.

He frowned and asked us how we would have reacted if someone photographed the children in our family. He added that the District Forest Officer had recently instructed them to keep away large groups from the nest. No matter how well-judged the distance might be, we were disturbing them one way or the other. 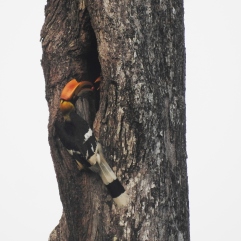 I left with sunken lips; disappointed with myself. I couldn’t help but ponder about how ethical my birding activities have been over the years. It would crush me to find out that I have been disturbing birds for the sake of reassuring a love for them.

I would feel trapped. With my left foot inside the gutter and my right forefinger pointing towards the stars, I might stumble upon a realization that all might be fair in war, but certainly not in love.